A small pilot study on the effectiveness of the EDUCATE 2B program for self-regulation techniques in the classroom setting of elementary children with ASD was completed by physical therapy doctoral students of Touro College in New York City in 2016. Unlike most research studies of mindfulness practices for ASD therapy that primarily focus on observational or self-report research methods, the study used a rigid experimental design to measure and compare the effects of an 11-week integration of EDUCATE 2B mindfulness-based tools in improving behavior, social-emotional learning and motor function of elementary students with ASD in their regular classroom environments. Twenty participants between second and sixth grade with various levels of ASD (six participants diagnosed as mild, eleven as moderate, and three
as severe) were recruited from four classrooms of students in a New Jersey elementary school that specializes in special education.

To accurately analyze findings, the study was designed with an experimental and control group. The educators for the experimental group (nine participants) attended a one-day training on the EDUCATE 2B program. They were provided with information on the neuroscience supporting the tools within the program and received training on how to implement 15 of the 30 EDUCATE 2B breath, movement, and mindfulness tools within their daily classroom participation. Only 15 of the 30 tools were implemented due to the short length of time given to complete the study. These tools were taught by their teachers and used three times per day for a total of six minutes per school day.

Meanwhile, the control group (11 participants) did not receive EDUCATE 2B practices instruction. All participants were assessed at the beginning of the school year and then post-instruction eleven weeks later using the Devereux Student Strengths

Assessment (DESSA)-mini to assess socio-emotional intelligence and the Movement Assessment Battery for Children (MABC-2) to assess fine and gross motor function of participants. Each measurement has high internal reliability and construct validity. The DESSA-mini assessments of participants (20 participants) were scored by teacher observations and the MBAC-2 assessments (18 participants, due to the inability of two participants to complete the testing) were evaluated by a licensed physical therapist blind to the study. While there was no significant difference between the experimental and control groups prior to testing in either of the assessments, findings indicated a significant difference between the control and experimental groups post intervention in both the DESSA-mini assessment (p=0.034) and the MABC-2 assessment (p=0.035). Students with ASD who received the EDUCATE 2B mindfulness-based practices instruction in their classroom demonstrated improvements in both DESSA-mini and MABC-2 scores. Students from the experimental group demonstrated improvement (p<0.05) in behavior and social-emotional learning, while the control group demonstrated a decline. While the experimental group did not show statistically significant improvement in gross and fine motor skills, the control group demonstrated a decline in motor skills. Furthermore, pretesting and post testing evaluations indicated that the introduction of the EDUCATE 2B program in the classroom protected students from declining in motor skills.

This preliminary study provides some scientific evidence of the potential effectiveness of integrating EDUCATE 2B or other mindfulness-based approaches to a child’s daily routine through not only therapy sessions but also through classroom activities. Results indicate that mindfulness-based programs can be easily implemented into the school setting as a means of a practical intervention that may optimize classroom learning for children with ASD through improved behavior and motor function. Although the sample size for the study is considered relatively small in most research approaches, it is currently one of the only studies including a control group for examining mindfulness-based approaches in assisting children with ASD. It is also worth noting that cluster random sampling was used for this study due to its convenience, and not for statistical probability within the diverse population. However, the findings of this study may help others to embark in future research of larger sample sizes and randomization in a controlled environment for more scientifically significant data regarding the impact such practices have upon the child’s ability to self-regulate, reflect, and refocus. Future studies could also evaluate the impact such in-classroom practices have upon social integration with peers, overall classroom environment, and harnessing and maintaining essential life skills. 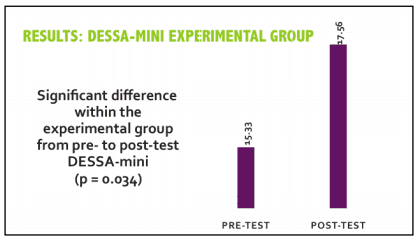 Find out how we can create a program that is the “right fit” for your school.
Contact Us

Find A Training Near You